Clarence Gihon painted memorable scenes of Parisian life at the turn of the 20th century. He was born in Philadelphia in 1871, and travelled to France in 1894 to further his studies. He studied under William Merritt Chase in New York, and Jean-Paul Laurens and Benjamin Constant at the Academie Julian in Paris.

He mainly painted landscapes and views of Paris by night, and at Parisian balls. Gihon had an interesting Neo-Impressionist, sometimes pointillist technique.
He produced many drawings for works by George Sand, and collaborated on the production of theatre sets.

He exhibited at many exhibitions throughout the world, and is represented at the muse de Vannes.

In 1929, famed French photographer Florence Henri was commissioned to produce a series of advertising photographs for the company La Lune Pasta. These commercial photographs showcase the success of modern advertising in transitioning from a more simplified and direct illustration to a more formalist abstraction that presents the product in unconventional ways.

It is plausible that the present painting was painted by the artist in his studio shortly before his death in 1929, which would account for the work being unsigned.

Gihon featured a large advertisement for ‘Biere au Lion’ on a Paris scene which was sold by our friends at Select Fine Art, Palm Beach several years ago (featured below). 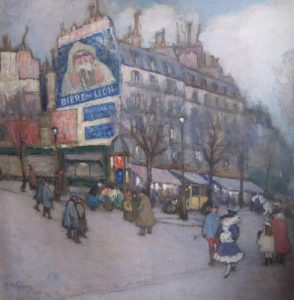