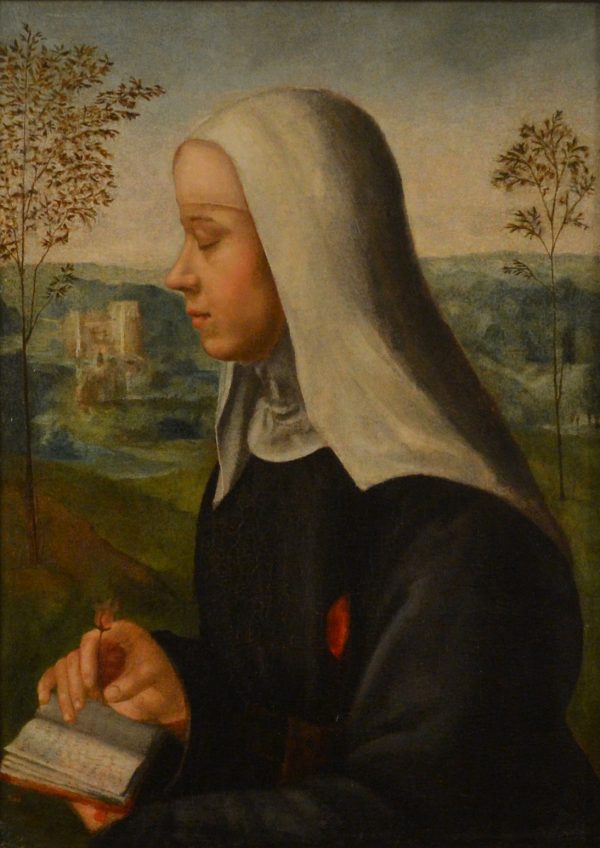 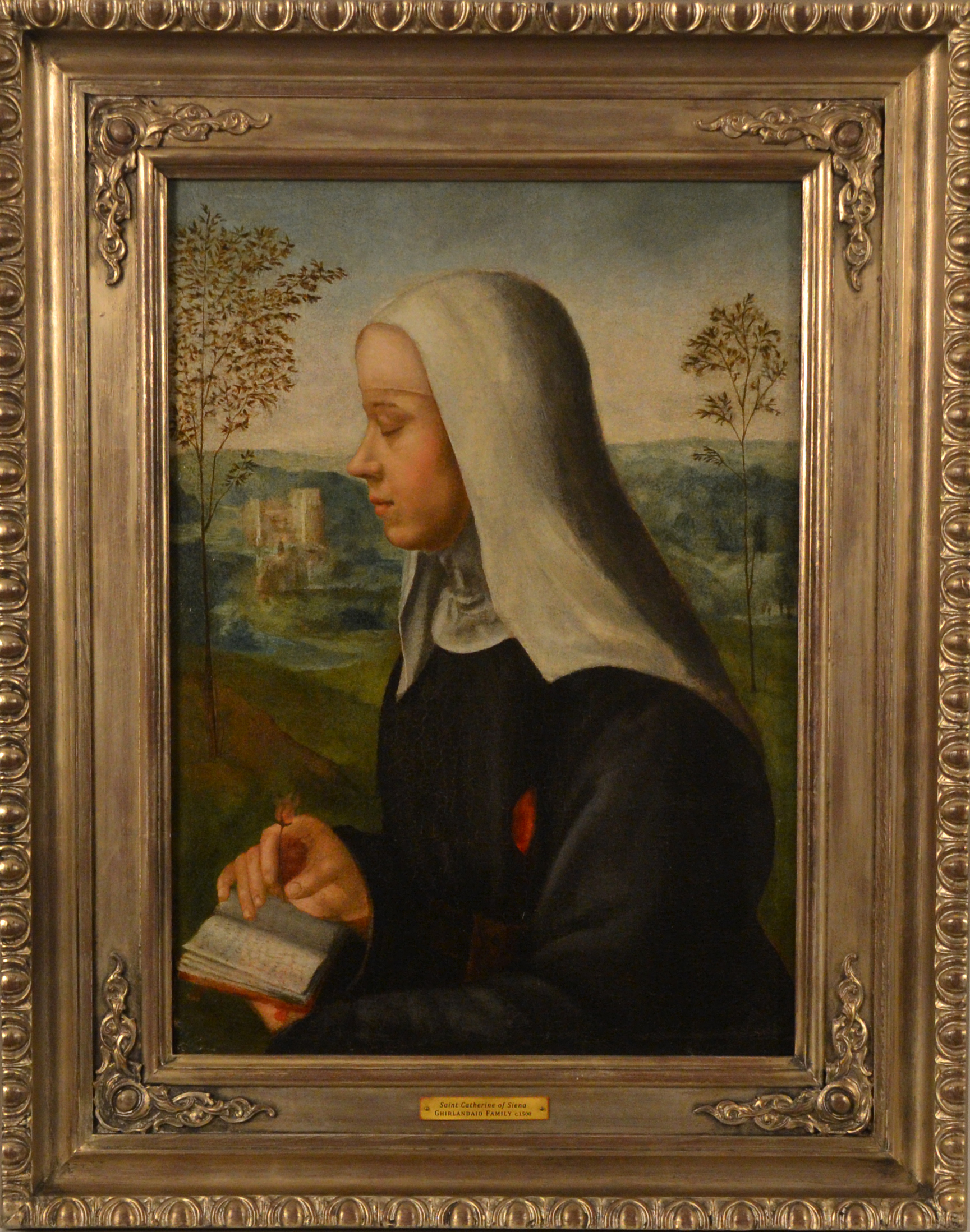 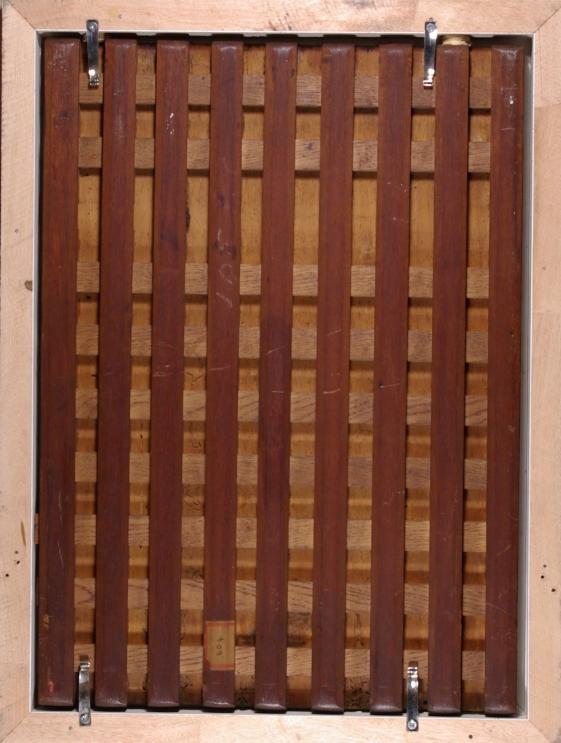 This charming portrait of Saint Catherine of Siena holding a hand written prayer book,and single pink rose exhibits the serenity of composition and everyday familiarity of gesture for which Domenico Ghirlandaio was famous.

It is thought the artist gained his nickname ‘Ghirlandaio’ ie. ‘Garland-maker’, through the trade of his father, a jeweller who specialised in the manufacture of silver and gold garland-like crowns or diadems worn by the young women of Florence. Originally trained as a goldsmith, Ghirlandaio showed extraordinary talent for painting and collaborated with his younger brothers, Davide and Benedetto, to produce some of the most notable and important artistic schemes of the fifteenth century, including the six portrait of Popes and two large frescoes in the Sistine chapel, Rome, (Resurrection and The Call of the Apostles) and the series of fifteen frescoes detailing the life of John the Baptist and the Madonna which adorn the Tornabuoni chapel in Santa Maria Novella, Florence.

Ghirlandaio’s style encapsulated the serenity of early Renaissance Italian art but his sitters and their gestures and attitudes come out of everyday domestic life (indeed, he famously included numerous portraits of important fifteenth century citizens in his frescoes) and he often transported the biblical into contemporary settings. Ghirlandaio’s style was enormously influential, indeed he is thought to have trained the young Michelangelo, and in this restrained and un-affected portrait, the artist reflects the simplicity and serenity of colour and composition which were the hallmark of works by Ghirlandaio and his brothers.

Restoration and revealing of the Saint

This extremely rare pre-Renaissance painting was discovered by Thomas Fine Art during cleaning,which revealed the iconology previously hidden in the 19th c.,Notably; the Stigmata,Rose,hand written pages of the prayer book, and a Tuscan Landscape.

The panel has since been sympathetically restored to museum standards and presented in a bespoke 16th century- style Italian frame gilded in 22ct Moon Gold leaf.

‘A painting that was bought privately as a pretty nun in a 19th century landscape by an anonymous artist has been attributed by experts to the “circle of Ghirlandaio”, the early Renaissance master and teacher of Michelangelo, and dated c.1500. After cleaning and removal of a 19th century row of trees, a Tuscan landscape was revealed. The nun can now be identified as Saint Catherine of Siena because the cleaning also revealed various iconographic clues: a stigmata to her hand and side, a rose in her hand, and the Saint’s hand-written prayer book. The painting is to be exhibited for the first time since the discovery by Thomas Fine Art.

Catherine of Siena, attributed to the “circle of Ghirlandaio”, c.1500, during and after restoration.

Patroness of the City of Siena, who was instrumental in bringing about the return of the papacy from Avignon to Rome. One of two patron saints of Italy, together with Saint Francis of Assisi.

Saint Catherine is most often shown in paintings dressed in the white veil and black cloak of the Dominican Tertiary and holding a hand written prayer book in allusion to her writings, and flowers, notably lilies as a sign of purity, however roses have also been historically associated with her.

The people of Siena wished to have St. Catherine’s body. A story is told of a miracle whereby they were partially successful: knowing that they could not smuggle her whole body out of Rome, they decided to take only her head which they placed in a bag. When stopped by the Roman guards, they prayed to St Catherine to help them, confident that she would rather have her body (or at least part thereof) in Siena. When they opened the bag to show the guards, it appeared no longer to hold her head but to be full of rose petals. Once back at Siena, as they reopened the bag her head was visible once more. Due to this story, St Catherine is often seen holding a rose.

The Sarcophagus of St. Catherine beneath the High Altar of Santa Maria Minerva, Rome is decorated with red and white roses.

The present work shows the Stigmata to both side and hand which were not visible during her lifetime,but appeared on her body after death. Saint Catherine received the holy Stigmata during a stay in Pisa in 1375, including the fifth ray representing the wound in Christ’s side. Saint Catherine was one of two saints, with Saint Francis to receive the five rays of the holy Stigmata.

It is highly plausible that the artist used the mummified head in the Basilica of San Domenico in Siena (as illustrated above), as the model for the present work, which depicts Saint Catherine in deep contemplation