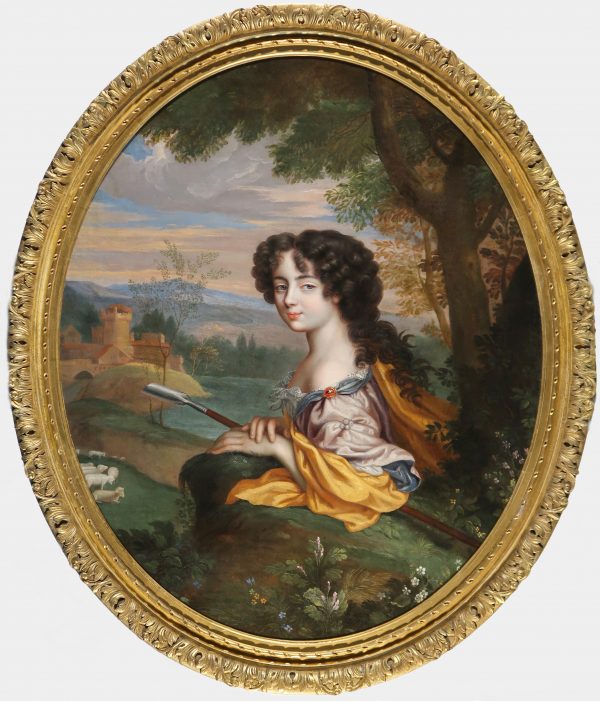 Henri Gascar was a French-born portrait painter who achieved artistic success in England during the reign of Charles II. He painted many leading ladies at court, including several of the King’s mistresses, before returning to Paris. He subsequently relocated to Rome, where he died in 1701.

‘Jane ‘Jenny Myddelton, Mrs May (1661-1740) Daughter of Charles Myddelton and his wife Jane Myddelton, Jane, known as Jenny, was baptised on 21st November 1661 at Lambeth parish church. Her mother and a friend, Elizabeth, Lady Harvey, appear to have made a serious attempt at promoting Jenny as a new mistress for the King in June-July 1678.

The plan did not succeed. In the 1690s, Jenny lived with her aunt, Frances Needham, in St Albans and was involved in looking after the daughters of Sarah, Duchess of Marlborough. She married Charles May, nephew of Baptist May, of Frant, Sussex, in 1711, and died in June 1740.’

G. Steinman Steinman Some Particulars towards a Memoir of Mrs Myddelton, the Great
Beauty of the time of Charles II (Oxford, 1864, and addenda, 1880) pages 58 and 59;
John Chaloner Smith British Mezzotint Portraits (London, 1878-84, 4 Volumes) Volume 2,
page 526, no. 7;
Catharine MacLeod and Julia Marciari Alexander Painted Ladies: Women at the Court of
Charles II (London, National Portrait Gallery, and New Haven, Yale Centre for British Art,
2001) pages 187, with an illustration of the mezzotint, and 244.

In Painted Ladies, Julia Alexander observes that both this painting (identified as an oval sold
by Sotheby’s on 11th July 1990, lot 25) and the associated mezzotint represent not Jane Needham, Mrs Myddelton (c.1646-c.1692), as previously thought, but her daughter Jane, known as Jenny.

She writes as follows:

‘In this striking composition, Jenny appears in the guise of a shepherdess. Her body is hidden behind the rock ledge on which she leans and consequently the painting appears almost as a hybrid between an intimate head-and-shoulders portrait and the more standard three-quarter length.…Gascar’s image is intimate; the sitter’s face is neatly framed by her rich dark curls as well as the close, dense foliage to her side and the dappled evening sky behind. Her expression suggests innocence and her pose immediacy – she looks as if we have just surprised her in her glade, almost as if awoken from a reverie. Jenny Myddelton would have been in her mid-teens when this portrait was made and…Gascar presents her on the cusp of womanhood, between innocence and experience.

‘This portrait may well have been made as part of the plot to promote Jenny as a new mistress for the King, a scheme that was devised – or at least promoted – by her mother in 1678. In choosing Gascar (Louise de Kéroualle, Duchess of Portsmouth’s preferred painter) as the artist for Jenny’s portrait, her promoters would have been making a hopeful attempt to garner the monarch’s attentions, one that would have been meant to flatter the Duchess as well. An affair between Jenny and Charles II would have secured for the Myddelton women at least temporary financial security; the family had apparently depended a great deal on the generosity of Jane’s lovers since the early 1660s. The plan appears to have failed, however, and Jenny eventually married Charles May, Equerry to Mary II. In her will, she bequeathed to a Miss Jenny Boden (presumably her niece) ‘my own picture’…’