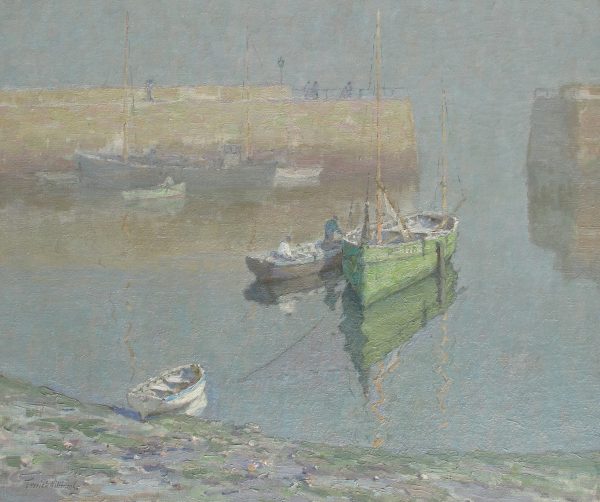 Terrick John Williams was born in Liverpool, and educated at Kings College School, London. He was expected to continue in the family business. His determination to pursue an artistic career, however, saw him travel to the Continent, where he was to study under Charles Verlat in Antwerp, and later at the Académie Julian in Paris, under such masters as Benjamin Constant and William-Adolphe Bouguereau.

In 1891, Williams took on studios at the recently established Blackheath Art Club, from where he submitted works for exhibition at the Royal Academy, the Royal Institute, the Royal Society, and many other Institutions. Like many artists of his generation, Williams’ fascination with natural light and naturalistic subjects, saw him drawn to the fishing villages and harbours of Northern Europe.

Among his many exhibited works were views of Brittany, Normandy and St. Tropez, as well as many Dutch, Italian and British ports and harbours.
By the time of his death in 1936, Terrick Williams was well established as a major British artist and Academician. A memorial exhibition was held at the Fine Art Society in 1937.

Gallery note: This is a lovely example of Williams work, capturing the sunlight and mist of early morning.