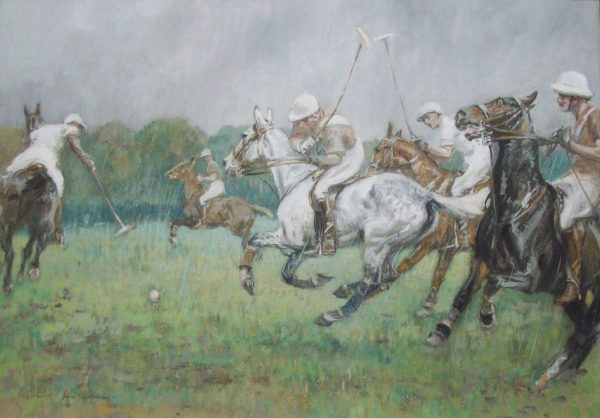 After studying at the Royal Academy, Holiday began working as an illustrator for publications such as the Graphic, the Tatler and the Illustrated London News. When war was declared in 1914, he continued to work for the Graphic as a war artist before joining the army and serving as gunner in the Royal Field Artillery on the Western Front. His artistic talents were soon spotted and he was made a Reconnaissance Officer. Amongst other things he was assigned with, at high risk, sketching enemy positions in No Man’s Land. It was during this time, often having to work quickly, he developed a certain fluidity and spontaneity to his style.

His painting continued in this manner after the war and was particularly suited to his interest in the equine subject. He visited major race meetings such as the Grand National and the Derby to find inspiration.

Holiday broke his back in a hunting accident in April 1933 but continued to paint as brilliantly as ever until pneumonia set in and died in the early days of 1937.

Holiday became perhaps the greatest action painter of the horse in equestrian art. Lionel Edwards his great contemporary- ‘no one can or ever could, depict a horse in motion better than Gilbert did’.

Gallery note: Polo scenes of this size by Holiday are rare to find. This fine work on paper is in very good condition, from a client’s private collection of equestrian pictures now for sale. Framed image on request.