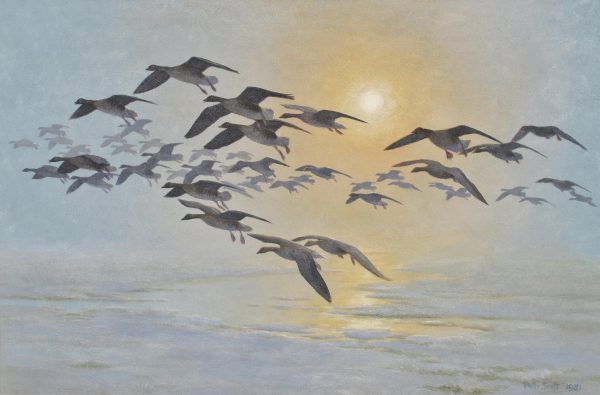 Sir Peter Markham Scott was born in London, 14th September 1909, the only child of the famous Antarctic Explorer Captain Robert Falcon Scott and sculptor Kathleen Bruce. Robert Scott died during his tragic expedition to the Antarctic when Peter was just two years of age, but not before writing a final letter to his wife asking that she encourages Peter to have an interest in natural history.

Peter Scott received his tuition from Oundle School and then Trinity College in Cambridge where Art and Natural Sciences were favourite subjects. Peter, in many respects, took after his Mother and had a good artistic ability, holding his first exhibition in London in 1933. However, his Father’s adventurous, inquisitive nature could also be detected in the young Scott, whose pursuits included wildlife research and numerous sports including sailing and ice-skating.

During the Second World War, Scott served with the Royal Navy on the Destroyers of the North Atlantic, before commanding the only squadron of Steam Gun Boats in the English Channel. He also helped design and develop ‘Shadow Camouflage’ and was awarded the Distinguished Service Cross for bravery.

Following the War, Scott founded the Severn Wildfowl Trust (now the Wildfowl and Wetlands Trust) and was also a founder of the World Wildlife Trust. He led various expeditions throughout the World concerning the study of birds and made regular appearances on the BBC, with television and radio shows such as Look and Nature Parliament. Scott also wrote and illustrated wildlife books as well as an autobiography.

Scott continued to sail and in 1964 competed for the America’s Cup. In 1956 he took up Gliding and became a British Champion, as well as Chairman of the British Gliding Association.

Peter Scott painted and exhibited successfully throughout his life and became President of the Society of Wildlife Artists and the Nature in Art Trust. He also tutored many artists including Paul Karslake FRSA. He was knighted for his services to conservation in 1973. Scott was remarkably successful in many fields but it is chiefly for his conservation work and his Wildlife paintings that he will be best remembered.