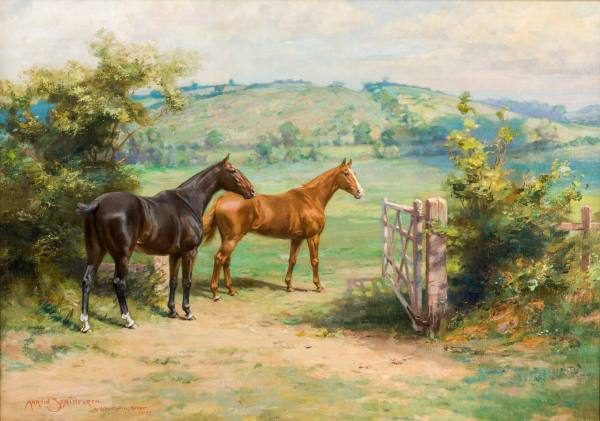 Chestnut and a Bay Hunter

Martin Stainforth began his career as an artist in England and travelled to North Queensland in 1908 which led to his settling in Australia and developing his skills as a painter of equine portraiture. Among his works there is a portrait of the 1912 Queen Elizabeth Stakes winner, Trafalgar.

He had the gift of detecting horse’s characteristics, coats of fine beauty and texture, and the ability to depict speed and movement in his work. He was probably the finest painter of the racehorse ever to have worked in Australia.

He briefly returned to England in the mid- twenties, then returned to Australia, returning to England in 1930 where he was commissioned to do the portraits of a number of racehorses including Hyperion for Edward Stanley, 17th Earl of Derby and other prominent owners such as King George V.

In 1934 he moved to New York City where he would remain for fifteen years. He was hired to paint many famous American horses, including 1937 U.S. Triple Crown winner Man o’ War, widely considered one of the greatest racehorses of all time, sold at auction for 84,000$US. He returned to England in 1949, where he died in 1957.

Works represented: The Australian Jockey Club and National Museum of Racing, Sydney. The Hall of Fame in Saratoga Springs, New York and The National Horseracing Museum in Newmarket.