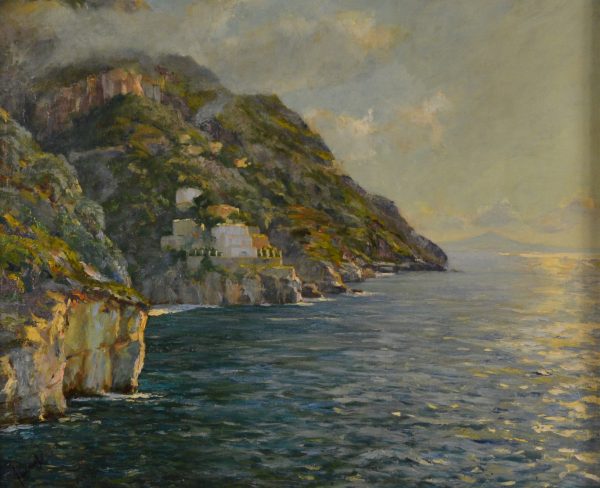 Edward Cucuel was born San Fransisco in 1875. At the age of 14 he attended the local academy of arts in San Fransisco, proceeding to work for a newspaper ‘The Examiner’ as an illustrator. He then entered the Académie Julian and Académie Colarossi and went on to study at L’École des Beaux-Arts under Jean Leon Gérôme.

A famed painter of genre scenes, landscapes, nudes and portraits, Cucuel’s early work bears the influence of Expressionism, while his style became more subdued and essentially more commercial in the later part of his career. Following his studies Cucuel returned to the USA in 1896 but returned to Paris soon after, from where he proceeded to travel through Europe to study the Old Masters. He moved to Munich in 1907, where he joined a group of artists, ‘Scholle’, under the leadership of Leo Putz and took part in the Secession exhibitions in Munich. In 1912 Cucuel exhibited in Paris with great success, and the following year became a member of the Société Nationale des Beaux-Arts and the Salon d’Automne. In 1915 his work was exhibited at the P.P. Expo in San Francisco. At the outbreak of World War II Cucuel returned to the USA. He settled in Pasadena where he remained for the duration of his life.

Cucuel’s work is represented in many important collections around the world, including the Detroit Institute, The Museé National des Arts et Décoration (Louvres) and the Birkenhead Museum, Liverpool (now the Williamson Art Galerry & Museum, Liverpool), and a number of books have been written about his work.